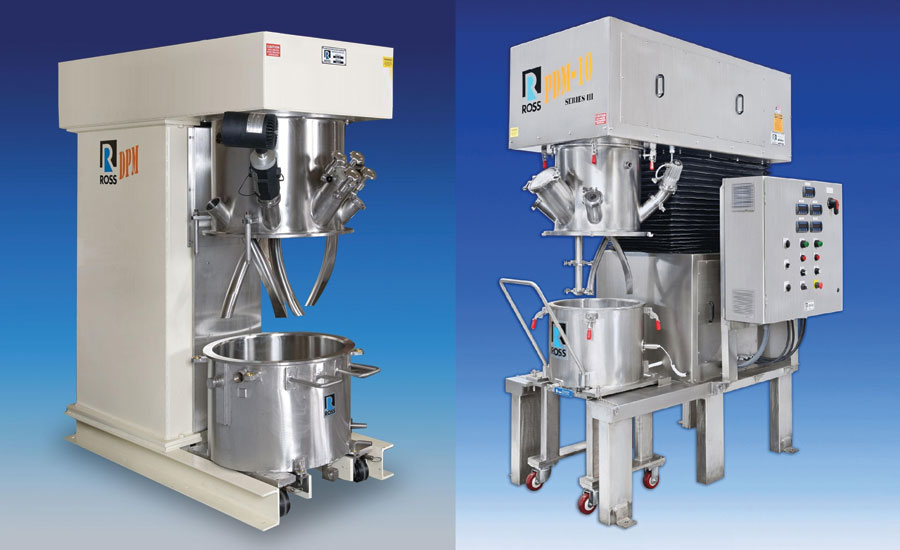 Mixing strategies for ceramic powders differ from one application to another.

The dispersion of ceramic powders into some form of fluid vehicle is a near-universal procedure in the manufacture of ceramics and composites. Through this operation, different ceramic systems are blended together, brought to intimate contact with additives, and transformed into a material that can easily be shaped into complex geometries or applied as a coating. The dispersion step is critical because any inconsistencies or agglomerates usually cannot be corrected in downstream processing and directly affect finished product quality.

Quite often, a high-solids dispersion is favored so as to maximize density, reduce defects, shorten drying time and lower cost. Solids loading vary anywhere from 40% to upwards of 80%, depending on various characteristics of the ceramic particles, the solvent, binder and additives, their interactions, and the requirements of the forming method. Mixing strategies and techniques therefore also differ from one application to another.

Ceramic dispersions take on a wide range of rheologies during processing—from low-viscosity slurries and pourable slips to very stiff doughs. Mixer selection is generally dictated by viscosity rather than percent solids. The starting solvent viscosity, the maximum viscosity reached during processing, and the final viscosity (if different from maximum viscosity) are all important considerations. Note, too, that some finished mixtures are more granular in form, rather than a fluid or paste.

Conventional single-shaft mixers such as propellers and turbines are capable of preparing high-solids formulations in the low-viscosity range; however, cycle time is often too long when dealing with stubborn agglomerates. In many cases, a stable lump-free suspension is not achieved, despite prolonged mixing in a low-shear device. To accelerate or improve dispersion, saw-tooth high-speed dispersers (also sometimes called dissolvers) may be used. Turning at tip speeds up to around 5,000 ft/min, the open disc blade of a high-speed disperser creates vigorous turbulent flow in low- and medium-viscosity slurries up to around 50,000 centipoise. The disperser is effective in generating a vortex into which dry powders can be added for quick wet-out. As the batch thickens or increases in volume, blade speed is adjusted to maintain a good vortex and material turnover.

When processing higher viscosity formulations (> 100,000 centipoise), the disperser is more commonly used in combination with a low-speed anchor agitator. In such a multi-shaft mixer arrangement, the anchor helps to exchange materials from different parts of the vessel, essentially “feeding” the disperser blade with product that would otherwise not readily flow toward it. Scrapers attached to the anchor help promote uniform batch temperature by enhancing heat transfer across the jacketed sidewalls and bottom of the mix can.

Beyond 1 million centipoise, the anchor agitator, which turns from a fixed axis of rotation, starts to carve a path through the batch, rotate it as a single mass, or simply shut down due to motor overload. Around this viscosity range, it is best to use agitators that physically move through the batch regardless of product flow. This is the forte of planetary mixers, wherein two blades rotate on their own axes as they orbit on a common axis, passing through every point in the vessel in just a few minutes. Because the agitators are continually advancing into the batch, they contact fresh product all the time.

In the last decade or so, the classic double planetary mixer, which was traditionally equipped with two identical rectangular paddles, has evolved to include helical-shaped blades that are more efficient at handling viscous materials of 6 million centipoise or higher. The helical curve and graduated down-thrust cross-section of the newer “high-viscosity” blades produce excellent axial and radial flow while preventing batch materials from climbing up into the gearbox area.

Another innovation in planetary-style mixing equipment is a hybrid machine with one high-speed disperser and one low-speed planetary stirrer.* This combination offers versatility and is ideal for applications in which a series of mixing stages requires several types of mixing action. In one continuous mix cycle, for example, the hybrid machine can apply high shear and quickly disperse powders into a low-viscosity liquid. As the material thickens, the unit can continue the mixing process even after the product has reached a non-flowing state.

For extremely viscous and stiff dispersions, horizontal kneaders and kneader extruders remain the most powerful high-torque mixing tools of choice. Also called a double-arm sigma blade mixer, a kneader is composed of two z-shaped blades that rotate toward each other at differential speeds. The blades pass the trough walls and each other at close clearances, shearing and tearing even near-solid materials. At the end of the cycle, the trough of the mixer is tilted to discharge the finished product. A kneader extruder combines the efficiency of a conventional double-arm sigma blade mixer with the convenience of an extrusion screw located in a separate cavity just below the z-blades. The screw enhances mixing by feeding batch material into the blades; once the dispersion is complete, the screw extrudes the finished product out through a discharge opening or die.

Methods and Order of Ingredient Addition

Bringing a formulation from R&D to pilot scale almost always involves tweaking multiple conditions that may have worked perfectly in the lab, but are not practical in a production setting. One such parameter is the method and order of ingredient addition. Each type of mixer imposes inherent design limits as to how much product it can efficiently accommodate at various stages of processing.

For example, the liquid level must always fully immerse a saw-tooth disperser, whereas a double planetary mixer can handle very small liquid quantities and even blend dry powders. It may help to improve the dispersion quality if some portion of the vehicle is held back (i.e., artificially raise viscosity) to increase shear input, as long as a good turnover can be maintained at all times without overloading the motor.

If the starting material is a solid wax binder, the pellets or blocks can be melted right in the mix vessel with the use of a low-speed agitator that moves around the entire product zone, such as a two-wing anchor or planetary-style stirrer. By eliminating transfer steps, unnecessary cleanup and waste are avoided.

It is also important to consider whether to add powders in stages or through a charge port while the mixer is running. The former allows operators to close the vessel and establish vacuum before turning on the mixer. The benefits of vacuum mixing are discussed further in the next section.

It pays to evaluate the benefits of mixing under vacuum, as this technique has repeatedly been shown to produce void-free feedstocks that lead to engineered ceramic materials with improved strength. Vacuum mixing appears to reduce batch-to-batch inconsistencies, enhance dispersion quality and increase stability.

Single- and multi-agitator systems, including planetary mixers, can easily be designed for vacuum operation. Users should look into certain customizations (e.g., type of vacuum pump, filter and condenser set-up) to make the whole system as efficient as possible. For example, a rotary vane pump usually draws deeper vacuum (29.5-29.8 in. Hg) than a liquid ring pump. However, the latter may better accommodate condensate from the batch. It is also important to install the right trap for dusts, vapors or liquids to guard against contamination of the vacuum pump.

Vessel contents can be monitored through a sight glass on the mixer cover as vacuum is being applied. Watch for bubbling and changes in volume. A separate “break valve” in the vessel design allows the operator to pull vacuum, start the mixer and close off the chamber once the desired level of vacuum is reached. Isolating the mix chamber and turning off the pump at that point prevents any volatile constituents from escaping, which could upset the formulation and density. Once agitation is completed, gradually bleed air or inert gas back into the chamber.

Creating a uniform and homogeneous dispersion of abrasive ceramic powders requires a balance of adequate mixing and acceptable wear rate. In addition to particle size, shape and hardness, both rheology and agitation mechanism govern the abrasive effects due to velocity, turbulence, and shear input. Machine wear and metal contamination can be minimized by determining the appropriate agitation system (and operating speed range), material of construction and surface treatment, if necessary.

If an abrasive suspension is relatively low in viscosity, it may be batched using a high-speed disperser equipped with an ultra-high-molecular-weight (UHMW) polyethylene blade. (Polyethylene withstands wear better than stainless steel.) Adding a low-speed anchor to supplement the UHMW polyethylene blade may be suitable for turning over a denser or less flowable material. It is generally a good idea to remove scraper blades, typically made of Teflon, attached to an anchor agitator since particles can embed in them and cause aggressive wear on the vessel surfaces being scraped.

It is worth noting that, despite their capability for sub-surface powder induction into low-viscosity liquid, rotor/stator-style mixers are not frequently used for preparing ceramic suspensions due to abrasive wear. The exception lies in applications where the powders are very fine. While coarse, hard particles quickly abrade product-wetted steel parts, fine abrasive powders like fumed silica cause very slow rates of wear. If needed, certain modifications are available to mitigate wear, such as stators made of hardened 440C stainless steel and the use of wear-resistant alloys on the rotor tips, shafts, and bushings.

At the higher end of the viscosity spectrum, abrasive pastes and putty-like materials are ideally produced in a double planetary mixer because its agitators move at comparatively low speeds yet provide very thorough blending. Apart from low shear input, another benefit is that the mixer’s internal surfaces (product-wetted areas of the blades and vessel) can be lined with abrasion-resistant coatings. Some of the most commonly used coatings are ceramics themselves: aluminum oxide, chromium oxide and tungsten carbide. Other surface treatments include electropolishing, boronizing and hard chrome plating.

Aside from the agitators and vessel surfaces, the mixer’s discharge valve arrangement must also be designed appropriately. High-performance diaphragm, slide gate and plug valves are generally ideal for abrasive applications.

Dilatant or shear-thickening materials exhibit a rise in viscosity when subjected to stress. The greater the shear applied to a dilatant material, the more resistance is encountered. This process is reversible: when force from the stress dissipates, viscosity decreases and the material behaves like a fluid again. For example, silica dispersions and zeolite slurries can behave as dilatant fluids, and they do so more readily at higher solids concentrations. It is this very property that makes mixing dilatant formulations a unique challenge. Some manufacturers resort to filling a jar with material and rolling it for a lengthy period (sometimes as long as several days).

It stands to reason that the appropriate mixer for processing this classification of ceramic materials must be comparatively low speed and low shear. Yet mixer speed cannot be too slow or it won’t be able to break down agglomerates. Some degree of shear is required for efficient dispersion; therefore, the mixer must also have enough torque to accommodate the inevitable shear-thickening effects.

For these reasons, the most typically recommended machine is a heavy-duty double planetary mixer equipped with helical blades. This design not only accommodates a wide viscosity range but also facilitates convenient discharge (either by gravity or hydraulic press) and easy cleanup between batches. A highly versatile and scalable machine for ceramics and composite applications, the double planetary mixer can also handle quick-setting slurries that harden in minutes, as well as dispersions in wax that transition from a putty into a more granular consistency.