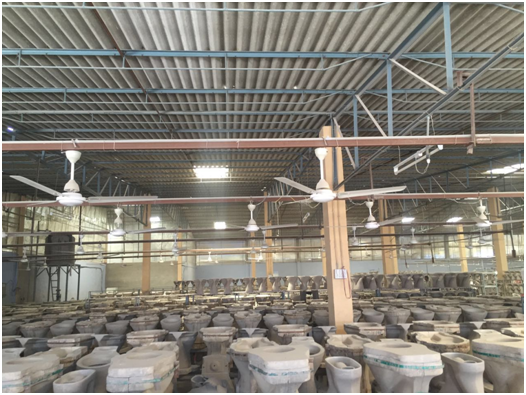 There is no denying the fact that India is staring at a huge energy crisis. To sustain the country’s rapid urbanization, scaling up energy efficiency projects looks to be the best bet. And incorporating energy-efficiency measures in new and existing buildings, especially the commercial buildings like industries, hotels, hospitals etc will go a long way in solving the crisis.

This case study highlights the case of Ambuja Ceramics, a well-known ceramic factory in the ceramic hub of Thangadh. The Ambuja Ceramic retrofit of ceiling fans shows that energy-saving retrofits are practical and profitable and the recovery period is less than a year.

In the traditional ceramic manufacturing process, there are a lot of sub-processes like milling, batching, mixing and drying. Drying is the process of removing the water or binder from the formed material. And in small scale ceramic industries, ceiling fans are used for this purpose.

The fans are used 24*7, and are switched off only when the plant is shut down for maintenance. Before switching to Gorilla Fans, the entire factory had fans which were consuming 80 watts at full speed. Apart from this, the ordinary fans could not sustain the hot and dusty environment and had to be replaced every 12-15 months.

But once the ordinary fans were replaced by power saving Gorilla fans, the scenario changed drastically. Gorilla fans, using superior BLDC technology, consume just 28W at full speed. This resulted in huge savings in electricity bill. And because there is no heating of the motors, it could sustain the extreme conditions very easily.

This is the calculation for the monthly savings in bill

This is what Ashok Bhai had to say about his decision to change the fans.

“Being a typical Gujarati businessman, initially, I laughed at the idea of buying such high priced ceiling fans. But once I did a pilot with 30 fans, I could see the results for myself. The fan actually pays for itself within 1 year. And more than the saving, what impressed me was the quality of the fan. It has been more than 6 months and till now each one of the 500 fans is running smoothly. The fans continuously run 24*7 and are switched off only during weekly maintenance. I am planning to change the fans for all my 8 factories over the next few months”
– Ashok Bhai, Owner of Ambuja Ceramics.

Taking a cue from Ambuja Ceramics, the other factories have also started replacing their ordinary fans with super energy efficient BLDC fans. We really hope that the trend spreads all over India.