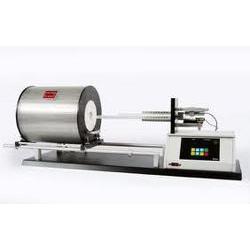 Dilatometers are used to measure the dimensional change of a material (ceramics, glasses, metals, composites, carbon/graphite, minerals, polymers, and others) as a function of temperature.

A standard dilatometer test determines both reversible and irreversible changes in length (expansion and shrinkage) during heating and cooling, and pinpoints where reactions occur that cause expansion or contraction.

The main advantage of the horizontal system is the uniform temperature zone for the sample. Most tests are performed with a horizontal unit.

The sample specimen is placed inside a silica tube holder, A probe rod extends from the end of the sample, within the sample holder tube and contacts the dial gage. The sampleholder is placed into a temperature controlled bath for expansion measurements from -30C to +30C.

NOTE: These dilatometers for plastics are special order and require extra delivery time.

Dual sample dilatometers allow 2 samples to be tested at one time, Dual systems can be configured for 2 test specimens for increased throughput or 1 test specimen and a 1 reference sample for differential analysis.

Every Orton dilatometer is supplied with the application software to be installed on the enduser’s PC in order to acquire, save and analyze the data generated. The Orton Dilatometer Software is written for Windows based personal computers. For Standard Horizontal dilatometers,the software allows the test to be remotely programmed and started.  It can be used to monitor the test in real time, or can be used to examine the data after the test cycle. The software imports the data through the USB interface and stores it on the hard drive for post-testing analysis.