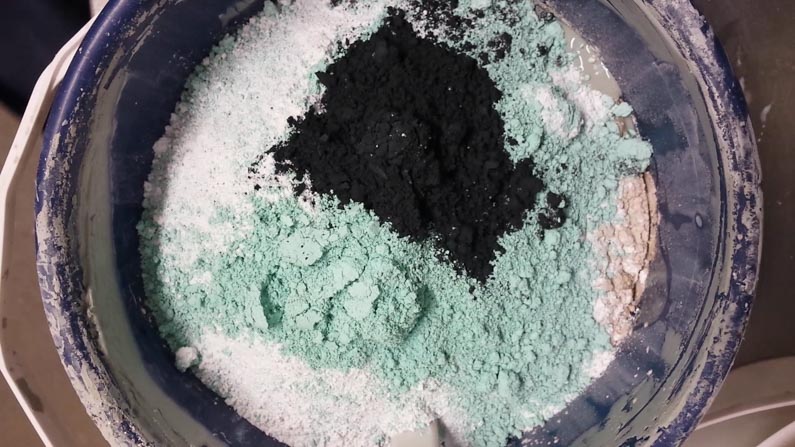 raw glaze is directly prepared by glaze slurry, these raw materials in the modulation does not dissolve in water, in the high temperature can mutual fusion. The above mentioned feldspar glaze, lime glaze, talc glaze, mixed glaze are such. Fritted glaze is in front of the pulp, the first part of raw materials are melted into a glass like substance and water quenched into small pieces (frit), and other raw materials mixing and grinding into glaze.

the fritted glaze for mature low temperature glaze and tend to be used in low melting point flux such as potassium carbonate, potassium nitrate, sodium carbonate, sodium nitrate and boric acid and borate and lead compounds, these substances in some belong to the odd soluble salts, some are poisonous. Raw glaze and frit glaze for fine pottery and some soft porcelain. Transparent glaze and opacifying glaze: transparent glaze is refers to the glaze after high temperature melt generated amorphous vitreous, the color of the green body itself can reflected through the glaze layer, the surface of glazed tiles often a layer of fusible transparent glaze. But sometimes in order to special decoration, or to cover enough white body of the billet, artificially to the transparent glaze introduced a certain amount of opaque agent and the glaze produces fine grain or fine bubbles or residues of fine grain and the formation of the so-called “Opacified Glaze”. Opacified Glaze by firing low temperature extraction can be divided into two kinds: high temperature opaline candle glaze for sanitary ware etc; low temperature frit Opacified Glaze for fine pottery glazed tiles and so on. The glaze is widely used in the preparation of ceramic products with low quality raw materials.

glaze, glaze is in glaze composition adding coloring oxides or salts thereof, showing a beautiful color glaze. For example, using iron as colorant glaze in reducing flame burning blue, with copper as the colorant glaze in reducing flame burning red. Due to the colored glaze decoration method has a certain decorative effect, and simultaneously, the operation is convenient, low prices can cover unsightly green body, so the application is extremely wide. At present, especially the new pigment appear constantly, to create a good foundation for the preparation of novel color glaze, a riot of colours. According to the different sintering temperature, high temperature and low temperature glaze glaze is divided into two kinds of glaze. Its limit is 1250 degrees. The stoneware and porcelain pottery is usually with high temperature glaze with low temperature glaze. According to the mechanism of different colored glaze, divided into ionic coloring, colloidal crystal coloring and coloring three.

glaze although currently used in a very wide independently. However, the ceramic glaze decoration is very few, usually used in conjunction with other decoration method. In addition, “white glaze” defects easily WIP edge, but also prone to defects or uneven glaze flow depth. For enquiries, please call us.