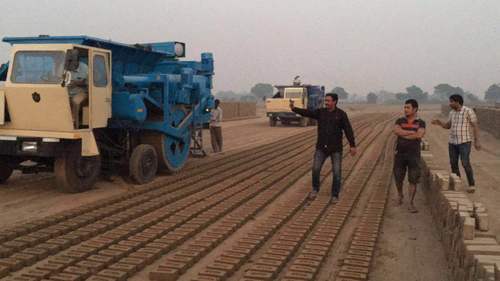 Clay brick are the basic building blocks of most household construction around the globe, particularly in Asia. The brick production cycle involves multiple manual processes, including the mixing of clay, molding of the mix in cubical shape, drying (under the sun or artificially), firing through controlled heating, and finally cooling at specified temperatures.

China represents the largest global brick industry, followed by India (growing at the rate of 5-10% per year). While this industry has offered strength to each household, it has negative aspects in the context of health concerns for workers. Nearly 70% of brick kiln workers in South Asia are estimated to be working in bonded and forced labor, according to a 2016 report by the International Labour Organization (ILO) and Eco Bricks. Interestingly, researchers are learning more about the extent of slave labor in India and the Asian brick industry through satellite imagery. It is estimated that of these bonded laborers, 68% are involved in brick excavation and molding processes.

Automatic brickmaking machines offer an efficient and cost-effective method to reduce bonded labor while producing product with comparable strength to hand-molded brick. These machines are divided into two broad categories: static and mobile. For static processes, brick are made in a machine that is kept in one place. Material is put into the machine to create the brick, which are laid down by laborers in a field for drying in the sun and then moved to kilns for firing. This method suffers from high capital and operational costs, and it doesn’t completely eliminate bonded labor.

For the mobile method, clay brick are produced while the machine is on the move. The tank can carry raw materials for 3,500 brick, while an extruder (or screwworm system) mixes the raw material in the tank. After it is mixed, the material is pushed to the main extruder, which moves it to a second extruder located above the mold roller die. In the last mixing stage, the second extruder continues to mix the raw material and sends it to the outer stage.

A router system located just above the roller dies then pushes the mixed raw material into the die molds; the router automatically analyzes the required amount of raw material for the die and fills the die with the needed material without any pressure or compression. After the router fills the die with the mixed material, the die roller begins rotating. When the brick nears the ground, a timer that is fitted in the die pushes the mold and the brick egg lands outside on the surface of the ground.

Sensors control the process, including the extruder system, gearboxes and gear motors. The sensors installed in the control panel are triggered within 7 sec of a fault, stopping the machine. When a fault occurs, a red light goes on in the cabin to alert the driver so they can analyze and rectify the problem. After the fault is corrected, the red signal turns green and the driver to pushes a button to restart the machine.

Brick produced through mobile brickmaking machines are found to be 60% stronger than brick made with manual methods or static machines. Labor is reduced since the brick are placed directly into the field for drying. Two trained operators are needed per machine, which results in an increase in the standard of living for those workers. In addition, mobile machines are capable of producing more than 12,000 brick per hour, bringing the operational cost of each brick to a fraction of a cent.

Mobile brickmaking machines are a proven solution for increasing the brick manufacturing rate while also reducing the required labor. Reduced operational costs and increasing living standards for employees make mobile brickmaking a win-win situation for all.