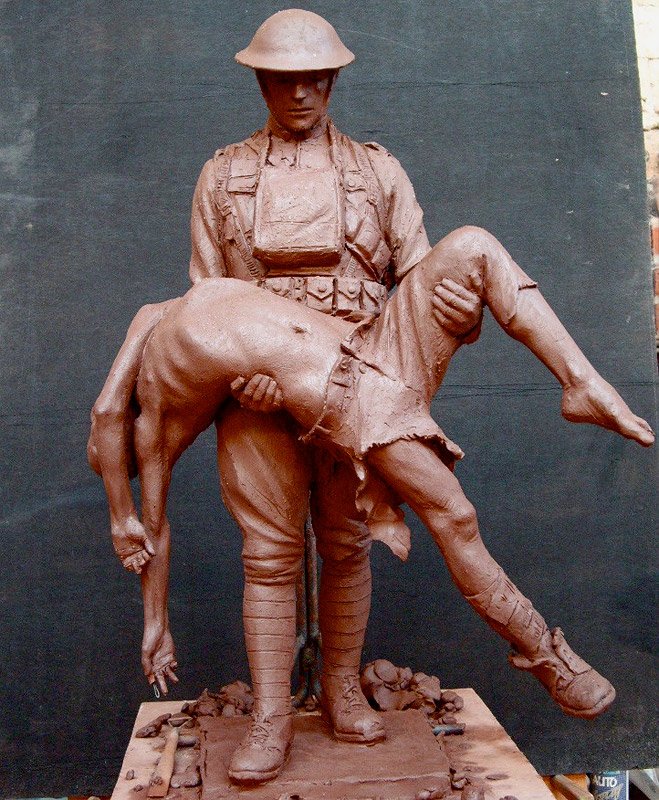 The Friday group of the Southport Contemporary Arts (SCA) who are holding an exhibition – CER�MICA. Members are from Wigan and Lancashire

Former Wigan residents Carole and Martin Dawber with their mum Betty. They are all members of the Friday group of the Southport Contemporary Arts (SCA).

When the Friday group of the Southport Contemporary Arts (SCA) met each week, they soon established a strong friendship bond and formed their own team.

As a result, they are unleashing CERÁMICA, a group exhibition by 10 local potters displaying and selling their latest creative and functional ceramics.

The group has a family vibe to it, with brother and sister Martin and Carole Dawber introducing their 92-year-old mother, Betty to the hobby.

Although the group meet in Southport, several members have strong links to Wigan and Lancashire.

It is fantastic working with a lump of clay and turning it into an object, whether it be a cup or a plate, or something that looks good, like a sculpture. Carole Dawber

Carole, a former fashion lecturer at University of Lancashire, who also taught in Wigan, says: “Our group have been meeting for two years. A collective of amateur artists got together to share ideas at the SCA and there are different groups each day of the week.

“The collective has become so successful it has a gallery and they have taken over the premises to include a ClayWorks studio.“

“We are the Friday group and we formed from the SCA sessions because we got on so well. We have a gallery and it is great to show our work.”

“Mum’s collections are often in demand. She puts her stuff on show and it sells. She enjoys being in the group and having the ability to make something.”

“She has a touch of dementia and making ceramics really helps her.”

“I have always been creative and studied fashion.”

“I had my own bridal and couture shop, Pierrot Pearls, in Wigan and after I sold up I started teaching fashion at Wigan Tec and later UCLan, where I remained for 10 years until my retirement two years ago.”

“That’s when I joined SCA. I like being creative and working with 3D materials. My career had always been in cloth so I wanted a new challenge.”

“I started doing pottery at night school at Wigan Technical College and I later found the class at SCA. It is a nice activity and is very relaxing and therapeutic.”

“Doing arts and crafts gives a greater sense of wellbeing, knowing we have created something.”

“We all do our own projects, rather than have a teacher. If someone gets stuck we help each other out and share ideas.”

“It is fantastic working with a lump of clay and turning it into an object, whether it be a cup or a plate, or something that looks good, like a sculpture.”

“One of our members has made some fabulous ornaments and sculptures for his garden, such as a pagoda and dragons.”

Sarah Park, of Halsall, near Ormskirk, says her creations are heavily influenced from her horticultural background, as she studied the Royal Horticultural Society (RHS) Certificate at Myerscough College, in Bilsborrow.

The 47-year-old, who until recently worked at Barking Mad in Leyland, says: “We have an eclectic mix of people, from aged 35 to 92, and it is somewhere I can express myself through clay.

“Horticulture is a huge part of my life – I didn’t understand how big a part it was until I got my lands on clay. Everything I make is linked to nature, making impressions of leaves and plants. I even look for foliage and leaves to add to it.”

The CERÁMICA exhibition showcases both new and contemporary ceramics, carried out using a wide range of ceramic techniques from rolling out slabs and coils; direct sculpting in clay; throwing on the wheel and experimenting with various glazes on the surface of the fired clay. The exhibition will be open at ArtHouse, Eastbank Street, Southport, from October 30 until November 17.

Sarah adds: “I am excited about the exhibition as for the first time I can show my items personal to me.”

The group meets each Friday from 10am until 12.30pm at ClayWorks, Southport.