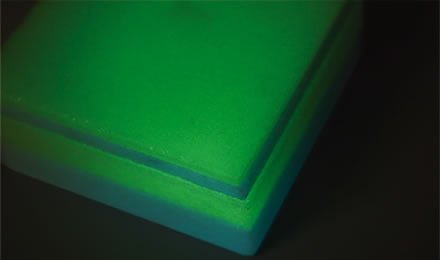 OSAKA–The dramatic rescue of Thai boys trapped inside a flooded cave this summer might not have been possible without the help of light-emitting tiles produced in Fukushima Prefecture.

The 12 members of a soccer team returned safely along with their coach on July 10, 18 days after becoming stuck in the cave in suburban Chiang Rai in northern Thailand.

In late June, Yasunori Iwamoto, 56, founder and president of Codomo Energy, received a report from the head of a Thai subsidiary that 13 people were trapped in a flooded cave.

He flew to the site with hundreds of Luna Ware products after ordering an additional several hundred tiles in stock in Thailand be sent there.

Luna Ware, which is produced at Codomo Energy’s plant in Kawauchi, Fukushima Prefecture, can emit light for up to 12 hours and is also resistant to water.

Luna Ware, which is often used as emergency exit lights, stores light from the sun and fluorescent lamps and gradually releases the light.

Conventional light-storing pigments dissolve and become unable to produce light when soaked in water. Luna Ware, coated with glass, does not lose its ability even if exposed to water.

In Thailand, Luna Ware was used to help ensure that cables were properly laid for divers between the cave’s entrance and the location 5 kilometers inside where the boys were.

When divers were swimming, they spotted one another by wearing Luna Ware on their fins.

When Iwamoto visited Thailand in early August, the boys and their coach expressed their appreciation by putting their palms together in prayer in the traditional Thai “wai” gesture.

“I got involved in the rescue operation by chance, but I am happy I was able to play a part,” Iwamoto said.

The company’s name represents children and energy, which Iwamoto says reflects his desire to protect children, who are responsible for the next generation, with eco-friendly building materials.

Iwamoto visited Fukushima Prefecture following the Great East Japan Earthquake and tsunami of March 2011, which triggered the accident at the Fukushima No. 1 nuclear power plant, and thought he wanted to contribute to recovery efforts.

The plant began production of Luna Ware in 2014.

“It’s important for Fukushima, which was stricken by the earthquake and nuclear disaster, to make a product that can ensure safety around the world,” Iwamoto said.