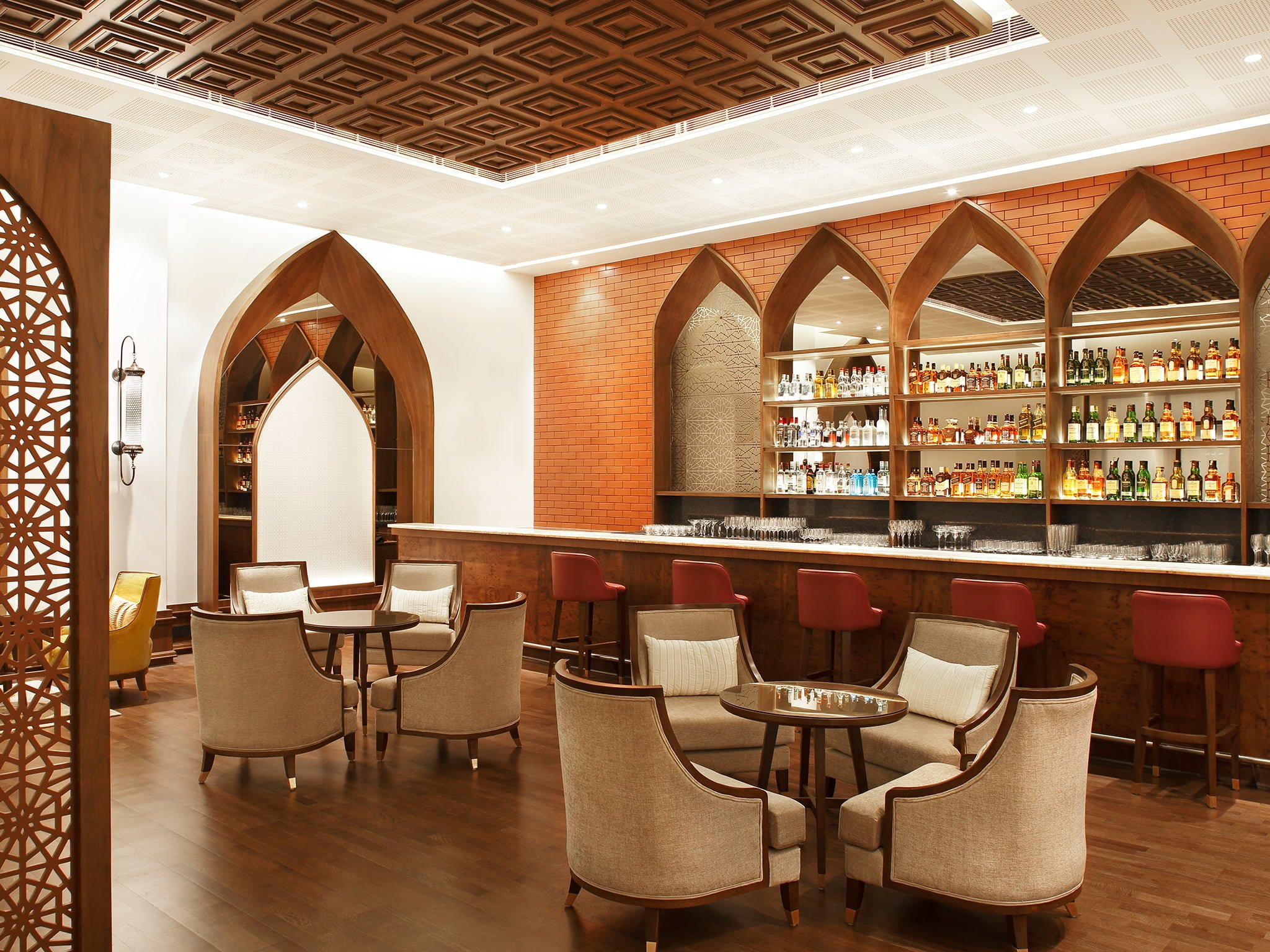 The story of how tiles made their way from China and Greece to Turkey and the rest of Europe to end up in homes across Delhi and India.

Last week, we had talked about the journey of the glazed tile to India during the Sultanate period and its extensive use well into the reign of Shahjahan.

This week, we carry on with ‘The Tile Tale’ and talk about their use in Delhi and elsewhere during the 19th century and later. We also talk about a twist in the tale that led to rather unexpected results.

The glazed tiles that were in use throughout the Sultanate period were mostly blue, though green and yellow were also in use aside from a rather luminous kind of light greenish-yellow that one came across once in a while – for instance in the mausoleum of Sheikh Fazl Ullah aka Sheikh Jamali.

In most cases, a tile was just a small square piece of ceramic that was placed next to other tiles to create geometric or floral patterns in combination with other tiles of similar or other colours. Occasionally we come across larger tiles that are complete in themselves, most of them carried a name or a religious verse or a phrase. Examples of such tiles can be seen at the Sheeh Gumbad at the Lodi garden or at the Agra fort gate etc.

Gradually, however, the glazed tile began to make way for fine ornamental trellis work in sandstone and marble. The later Mughal buildings and even palaces of the feudatories and mansabdars who had traditionally followed the architectural impulses spreading out from Delhi, gradually begin to move away from the use of tiles.

The glazed tile made a comeback a couple of centuries later, perhaps in the mid-19th century or a little later. It now arrived through a different route – across the oceans. The tile that had travelled from Turkey, perhaps through Morocco to Spain and Portugal, had grown in size by the time it established itself in Europe.

The kind of images it carried had also undergone a transformation. Large individual tiles that depicted a scene or a mythological character or a set of tiles that combined to make a complete picture began to be used both inside and outside buildings, especially in large public or private buildings in different countries of Europe.

Many of these tiles continued to use intricate geometric designs that had evolved in central Asia, but there was also increasing use of motifs and images that were typically European in their conception.

By the late 18th century, the use of tiles in bathrooms, lavatories and kitchens had begun to grow. They were easy to clean and required little maintenance. Tiles were also being used increasingly on floors and these trends had begun to be felt in India as well.

These impulses began to move inland from the three presidencies of Calcutta, Bombay and Madras. The French, with their little pockets of influence at Pondicherry, Yanaon and Chandernagor on the east coast and Mahe on the west coast, and the Portuguese presence at Goa, Daman and Diu also contributed to this impulse.

The bulk of the tiles that arrived initially were essentially three kinds – those to be used on floors, those for display and those for bathrooms and kitchens. 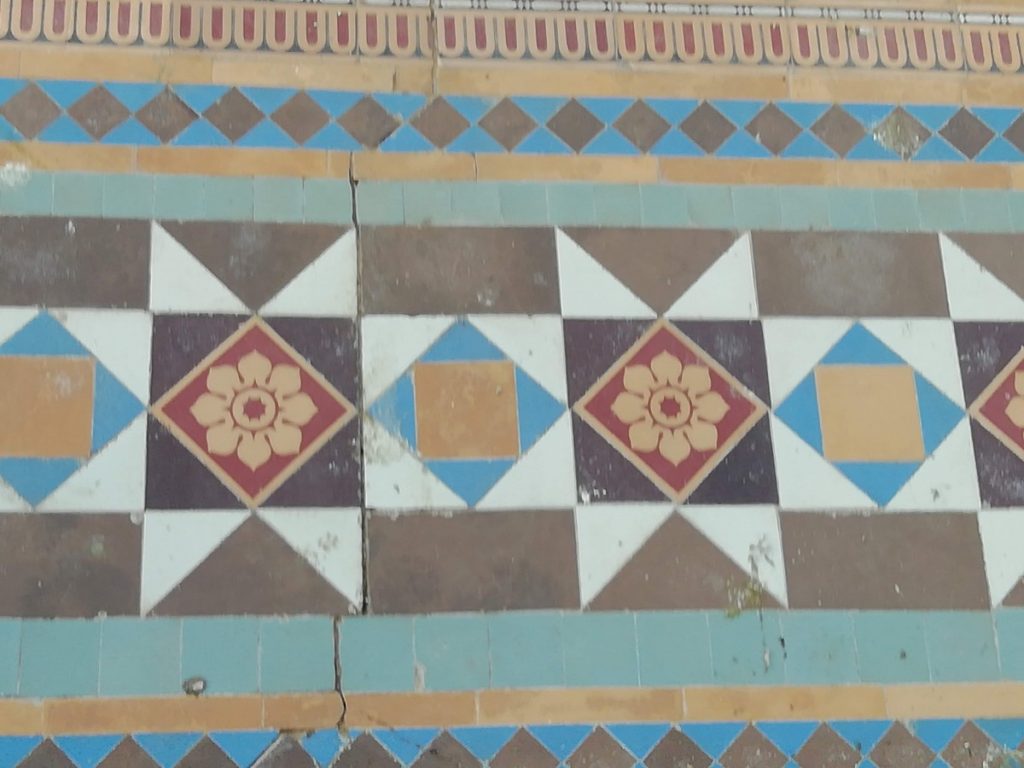 The tiles at Chowmahalla Palace in Hyderabad. Credit: Sohail Hashmi

The floor tiles were used for the purpose for which they were meant and in this piece we are including two images from the Chowmahalla Palace in Hyderabad as illustrations, many could also be seen in the now forever lost havelis of Shahjahanabad and in many of the new bungalows that were coming up in Kashmiri Gate and on what used to be the Mall Road, the Rajpur Road and Nicholson Road etc. 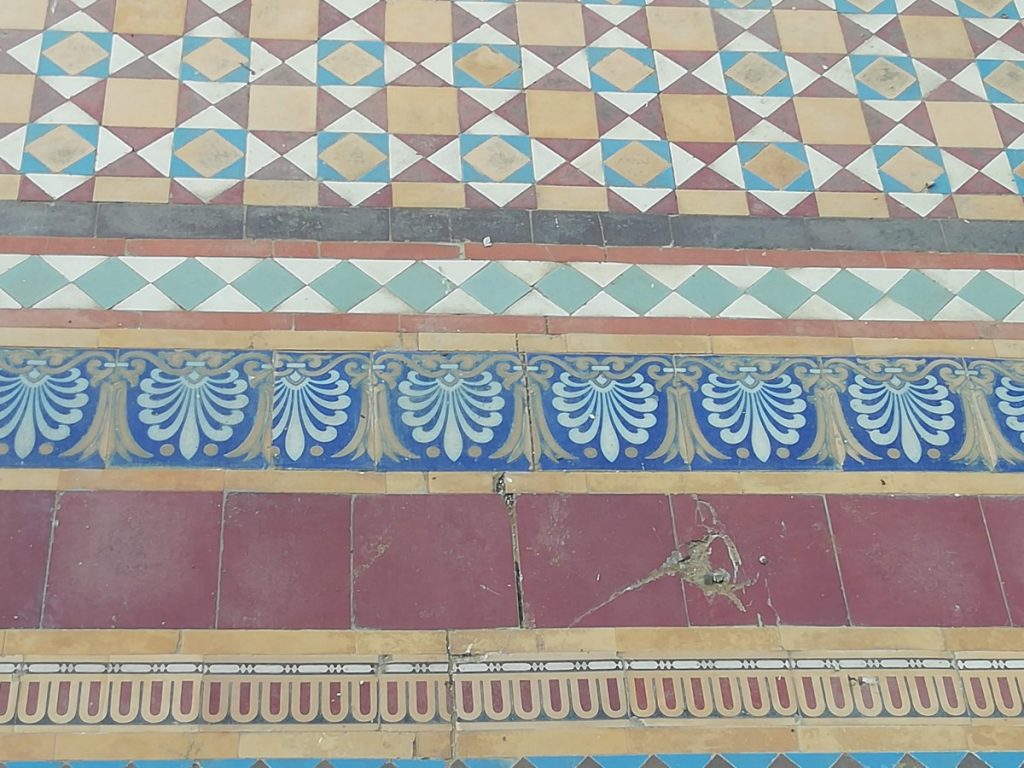 Of the second kind, we have seen only one surviving till today and this is a beautiful combination image, made with several tiles and placed near the stairs leading up-to a low terrace in the Haveli of Lala Sultan Singh at Kashmiri gate.

The image depicts a blue water pond with grasses and flowers, a bit of land, a duck in the pond and birds flying in a cloudless sky. A fine example of the kind of tiles that were then available in Delhi. 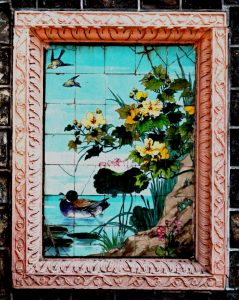 The third kind – the bathroom and kitchen tiles – were however put to a rather innovative use. These tiles had beautiful floral designs and many of them were done in relief, hand painted and glazed, they looked very pretty and no one was going to use them in that dark dingy place in the farthest and least used corner of the house. A clean bathroom was in any case an idea whose time was to come after several decades in the future.

Our kitchens, especially in those days, were not the ideal place for the use of these tiles, we sat on the floor and cooked on wood fired chulahs and the kitchens were filled with smoke, these tiles would very soon get covered in layers of soot. No one was going to waste such beautiful, expensive and vilayati stuff inside a kitchen.

The people, therefore, put these tiles to many rather creative uses.

The increasing use of steel girders from the post-1864 period, after the arrival of the railways to Delhi, had led to the creation of large terraces on the first floor in markets like Chawri and Chandni Chowk and these tiles began to be used to decorate terrace fronts. Some of these tiles, though now heavily covered in thick layers of accumulated grime, can still be seen at Chawri Bazar.

Aside from decorating the arched facades of shop fronts, they were to be found bordering the pointed arches at the main gates of many a kucha and Katra.  They found pride of place in sitting rooms or baithaks of the elite, decorating the mantlepieces built above ornamental fire places imitating the drawing room of the sahebs. They decked-up the ornate railings of the havelis of the movers and shakers of 19th century Delhi like the huge residence of Lala Chhunnamal.

Entire houses were decorated with these tiles. There is one small haveli in Kucha Ruhullah Khan that still retains most of its original tile work and the images (see lead image) will give you some idea of the profusion of colours these tiles represented and how Dilliwallahs took to them.

These tiles were also used in a big way in temples and we have two images one from the Babe Lalu Jasrai Temples of the Punjabi Khatris in Chhipi Wada, Near Paiwalan, to the North West of Jama Masjid and the second from the 19th century Shwetambar Jain Temple in Kinari Bazar. 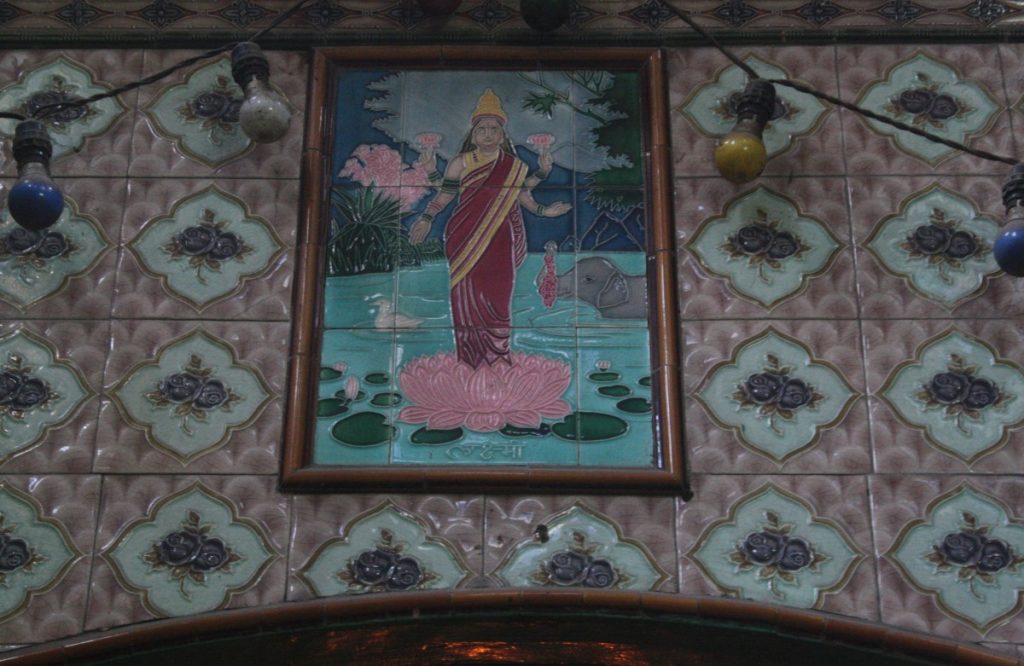 The tile makers must have been conducting their market research and they leant rather quickly that Indians love images, they also learnt that the tiles were being fixed in places of worship. Soon – very soon in fact – the markets were flooded with images of gods and goddesses; tiles presented an image of goddess Lakshmi, or Saraswati or of Bal Gopal vanquishing the Kalia Nag were promptly lapped up. 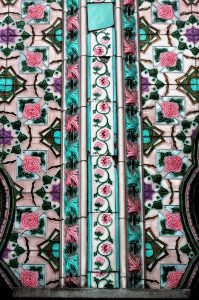 The tile manufactures also learnt that everyone likes images, but not everyone wants images of gods. Soon enough, we had images of Mecca and of the Shrine of the Prophet at Medina, but we also had images of the Taj and other non-denominational images look closely at the first image from Haveli Kucha Ruhullah Khan and you will notice all these.

The fixing of tiles meant for the bathroom in places of worship had led to the creation of tiles with images of gods and images of gods are being fixed today on walls flanking busy streets to discourage people from spitting on or relieving themselves in public places.

And black glazed ceramic tiles have now become the preferred finishing material for Shani temples, white ones have been reserved for little roadside shrines used to grab public land that will soon grow into a pracheen temple, while green glazed tiles are almost exclusively used for covering roadside graves that will soon turn into a popular Sufi-Shrine.

Who could have imagined that the mosaic from Greece and glazed ceramics from China would travel through Turkey and Europe to end up into something to be used to prevent the Indian male from emptying their collective bladders.

Sohail Hashmi is a filmmaker, writer and heritage buff.