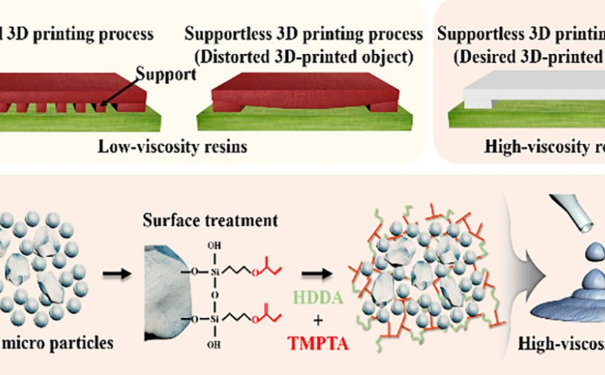 In ‘Optimization and characterization of high-viscosity ZrO2ceramic nanocomposite resins for supportless stereolithography,’ Korean researchers examine new materials for SLA printing, working to improve both dispersion and photo-curing properties. Pointing out that AM processes have been used to create a range of ceramic products via SLA and other methods, SLA is becoming most popular due to high resolution and good surface treatment. UV-composite resins have been used previously for many studies, attempting to increase ceramic particles, but for most research, micro-particle content has been most common.

“Ceramic composite resins with higher micro-particle contents showed properties such as a lower viscosity and sedimentation, and their poor dispersion stability seemed to contribute to ultimate deterioration of the properties of the 3D-printed objects,” state the researchers. “Furthermore, this approach is difficult to apply to the supportless SLA 3D printing process, due to lower viscosity properties of resins.”

Here, the researchers created a high-viscosity APTMS (3-acryloxypropyl trimethoxysilane)-coated ZrO2 ceramic nanocomposite resins with 50 vol% of ceramic particles at a mixing ratio of 70:30 by volume for nano- and microparticles of ZrO2 for use in supportless SLA.

“Nano- and micro-particles of ZrO2 ceramic were mixed at various volume ratios of 70:30, 50:50, 30:70, and 0:100, and then the surface of the mixed ZrO2 ceramic particles were functionalized to acrylate groups through hydrolysis and condensation of APTMS. For the hydrolysis and condensation reactions, mixtures of APTMS, ethanol, and distilled water in ratios of 1:7.5:91.5 by mass were first vigorously stirred. Mixed ZrO2 ceramic particles were then added at 30 wt% to the APTMS solution, which was then hydrothermally treated at 100 °C for 3 h and dried under vacuum for 24 h at 100 °C.,” states the research study. In the production of low-viscosity resins for complex geometries, the researchers recommend use of supports, due to results in the study yielding ‘sagging and distorted structures.’ With high-viscosity resins, however, they state that they almost seem to serve as the supports themselves.

“In other words, it is possible to achieve supportless SLA 3D printing using high-viscosity ceramic nanocomposite resins, which can help eliminate the washing process of supports and minimize the materials used,” state the researchers.

“For better rheological, dispersion and photo-curing properties, the optimum ratios of non-reactive diluents (IPA) were investigated by controlling the IPA contents, and the effects of the different polymer network structures on the 3D-printed objects before and after sintering were studied against the mixing ratios of HDDA and TMPTA monomers,” concluded the researchers.

“This is the start of a promising era for fabrication of customized zirconia dental implant restorations using supportless 3D printing.”

Ceramics and 3D printing are becoming more common, especially due to the wide range of applications that can be improved due to all the benefits of the new technology, such as titanium matrix composites with ceramics, glass-ceramics at the nanoscale, and even ceramics 3D printing robots. What do you think of this news? Let us know your thoughts! Join the discussion of this and other 3D printing topics at 3DPrintBoard.com.